Capitalism and Democracy in Central and Eastern Europe

Home » Baltico » Capitalism and Democracy in Central and Eastern Europe 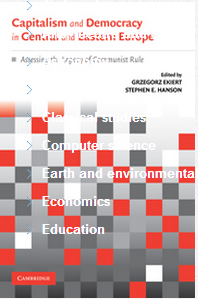 This volume presents a shared effort to apply a general historical-institutionalist approach to the problem of assessing institutional change in the wake of communism’s collapse in Europe. It brings together a number of leading senior and junior scholars with outstanding reputations as specialists in postcommunism and comparative politics to address central theoretical and empirical issues involved in the study of postcommunism. The authors address such questions as how historical ‘legacies’ of the communist regime be defined, how their impact can be measured in methodologically rigorous ways, and how the effects of temporal and spatial context can be taken into account in empirical research on the region. Taken as a whole, the volume makes an important contribution to the growing literature by utilizing the comparative historical method to study key problems of world politics.