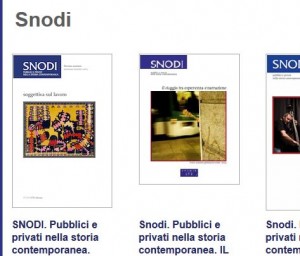 The journal Snodi. Public and Private in Contemporary History will devote its 13th issue to the theme of political representation; we invite submissions of papers which address in particular the dilemmas, the conflicts and the tensions that can arise between duties of representation and individual choices and inclinations.

We are interested in explorations of the ways in which the conflict between the ‘self’ and the ‘collective self’ has broken out within the political sphere at different stages of the modern era, from the late eighteenth century to the present, and in different geographical contexts. This issue has contemporary relevance, not only in Italy, as demonstrated by the sale of MPs, the crisis of political parties, and the attempt to centralize and control elected groups of representatives within various institutions. Moreover, the need to reflect on this issue in a historical perspective is motivated by the development of new technological tools, which, through the rhetoric and the mimesis of direct democracy, provoke questions on the functions of political representation and on its deepest meanings.

We therefore invite contributions that reflect on the dilemmas of political representation from the point of view of those who are in charge – from the origins of the parliamentary system, through the various stages of the extension of suffrage, to the development of mass democracy in the twentieth century. Active practice of political representation has exposed its protagonists to tensions between their moral beliefs and the ideals and different needs of ‘governability’ (of institutions, parties, et.) in areas such as citizenship, war or peace, democracy or dictatorship, economic choices and  welfare, religion and ethical issues. An examination of the moments of either crisis or resolution of such dilemmas, with a focus on individuals and on their choices, may provide a key to a better understanding of representative democracy.

We invite submissions of papers which address this issue by exploring the conflict between the self and the collective self during the modern era. For the section “Sources of the Self/Sources of the Us” we would especially appreciate shorter pieces offering an analysis of sources which allow an understanding of how this conflict has been handled or has emerged in different contexts and historical periods.
Guidelines for submission

Please send your contributions to the address: snodi.pubbliciprivati@gmail.com.

Please include a short CV and a list of your main publications. Authors of articlesin English must have the final version of their texts read and edited by amother-tongue reader. The articles selected for publication for the section‘Scrivere’ will be peer reviewed.

Proposals will be selected by 7 December 2013. The deadline for articles is 15 February 2014. The issue will be published by Spring 2014.
Organizer