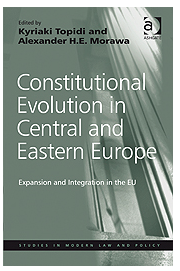 Expansion and Integration in the EU

This book examines EU enlargement by studying how domestic constitutional evolution in the new member states contributes to European integration. In contrast to the usual top-down analytical pattern, it reverses the paradigm by looking at constitutional developments and dynamics from the bottom-up, studying how domestic constitutional evolution contributes to European integration. The authors analyze constitutional trends from the perspective of ‘new Member States’ as policy-makers and not strictly as policy-takers. The issue of conditionality is also explored in a discussion of the extent to which pre-2004 and 2007 conditionality has had lasting effects at the level of constitutionalization of different areas and norms and if so, of what kind. The exploration of Europeanization effects in recent Member States substantiates and demonstrates how enlargement has been an important driving-force for the effective export of EU legal rules in this region.

The book utilizes a comparative approach to highlight the merits and obstacles created by the growing diversity in the constitutional rules and patterns of the new Member States. It also contains a section that places the CEE constitutionalizing map in a broader comparative European and global context, establishing links with similar transitional regimes in the continent and elsewhere.
Contents: Foreword, Lech Garlicki; Prologue: the nature and significance of the CEE constitutional transition, Kyriaki Topidi and Alexander H.E. Morawa; Part I Foundations and Methods of Constitutional Dialogue in CEE: Estonia as an EU state: lack of proactive constitutional dialogue, Tanel Kerikmae; The constitutionalization of EU law in Romanian jurisprudence, Simina Tanasescu; Fundamental rights in the EU’s post-enlargement landscape: an exercise in constitutional translation?s, Kyriaki Topidi. Part II The Role of Courts in the New Legal Order: Constitutional pluralism and judicial cooperation in the EU after the Eastern enlargement: a case study of the Czech and Slovak courts, Tomáš Dumbrovský; The constitutional versus the European role of the judiciary in Poland, Piotr Mikuli; Structural inconveniences of the Treaty of Lisbon in the Czech Republic, Jiri Zemanek; Kafka, Kelsen and supremacy: how European courts could interact with a view to fostering constitutionalism, Alexander H.E. Morawa. Part III The Rule of Law and Policy-Making in ECC after Enlargement: Raising the standard? The current challenges in human rights protection in Hungary, Bernadette Somody; Constitutionalization and the media in post-enlargement Central and Eastern Europe, Katrin Nyman-Metcalfe; The rule of law and the rise of populism: a case study of post-accession Bulgaria, Daniel Smilov; Index.
About the Editor: Kyriaki Topidi is a lecturer and Senior Researcher, School of Law, University of Lucerne, Switzerland. Her research interests are in the areas of European Law, and Minority Rights.

Alexander H.E. Morawa is Professor of Comparative and Anglo-American Law, University of Lucerne. He is also Counsel/Legal Advisor in proceedings before the United Nations Human Rights Committee, the European Court of Human Rights, and national courts, tribunals and agencies.
Reviews: ‘This is a rare and thorough collection of comparative studies dedicated to the fascinating events at the turn of the century. It includes detailed insights on the return to democracy and the rule of law within a common European constitutional heritage as well as on the preparation of the constitutional acquis for EU enlargement in the first decade of 21st century.’
Evgeni Tanchev, Chief Justice of the Bulgarian Constitutional Court and Council of Europe Venice Commission Member