From Free Europe to Free Poland 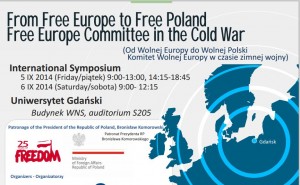 The Free Europe Committee (FEC, originally called the National Committee for a Free Europe) was a major instrument of American policy toward Soviet-dominated Eastern Europe during the Cold War. A public-private partnership of the United States Office of Policy Coordination/Central Intelligence Agency and leading members of the American establishment, the FEC organized a multiplicity of programs aimed at utilizing the talent of East Europeans forced into exile by the Communist regimes to promote the peaceful liberation of their countries from Soviet rule and their return to what would later be termed a “Europe whole and free.” The FEC spawned and was supported in part by the Crusade for Freedom, which publicized the Communist threat and solicited contributions from American citizens.

The best known and best researched project of the Free Europe Committee (FEC) was Radio Free Europe. Other activities sponsored by the FEC have received less scholarly attention. These projects included the Free Europe Press (which sent leaflets by balloon and mail and later books by mail and travelers to Eastern Europe), the Free European University in Exile in Strasbourg, the Mid-European Studies Center in New York, National Councils and the Assembly of Captive European Nations, international lecture programs, the associated Crusade for Freedom, and more.