History, Memory and Politics in Central and Eastern Europe 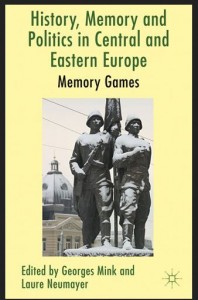 Twenty years after the end of communism, history still sparks intense discussions in the former Soviet bloc, as contested memories, primarily about communism and WWII, are constantly reactivated. Much of what is currently known about memory issues in post-communist countries is limited to state-centered approaches. This volume goes further and highlights two interrelated factors that account for the recent proliferation of memory games in Central and Eastern Europe: the growing number of political and social actors who try to elaborate and impose new memory norms into society, thereby challenging traditional narratives about the past; the ‘internationalization’ of conflicted memories through the multiplication of arenas for engaging in remembrance politics and devising memory policies, in accordance with norms produced by European organizations. In contrast to a narrow understanding of ‘transitional justice’, this collection of fourteen case studies situates conflicts around painful histories within the ‘ordinary’ operating of post-communist societies, concentrating on games played by political and administrative elites, activists and professional groups in various local, national and European venues.