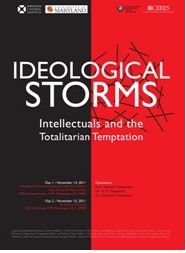 The Wilson Center, Embassy of Romania

The Center for the Study of Post-Communist Societies at the University of Maryland, College Park and the Romanian Cultural Institute, in collaboration with the Wilson Center’s Cold War International History Project began, in 2007, a series of conferences in Washington D.C. focused on providing, by means of reflection on watershed moments of post-1945 history, an overview of the global dynamics characteristic for the 20th century and its lessons and impact upon the 21st. In the previous years, the central topics were centered on the Sovietization of Eastern Europe, the promises of 1968, the meanings of 1989, and on the process of overcoming a traumatic past in post-authoritarian societies.

This year’s conference entitled Ideological Storms: Intellectuals and the Totalitarian Temptation will take place on 14-15 November 2011.

Day one of the conference will be held at The Wilson Center.

Day two of the conference will be held off-site at the Embassy of Romania.

The conference will provide an overview of the main issues raised by the temptation of the extremes in the 20th century and their weight upon the contemporary world. The aim is to create a forum that will discuss political passions, radicalism, utopian ideals, and their catastrophic consequences in the twentieth century’s experiments in massive social engineering. In the process it will attempt to chart the map of and explain what Hannah Arendt called “the ideological storms” of a century second to none in terms of violence, hubris, ruthlessness and human sacrifices.

15 November: OFF-SITE at the Embassy of Romania
To RSVP to Day 2 of the conference email: ideologicalstorms@gmail.com