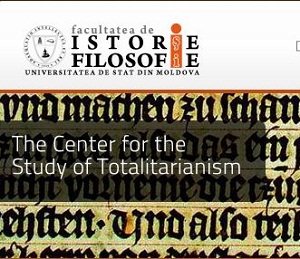 An annual publication of the Center for the Study of Totalitarianism, Moldova State University

The aim of the journal is to contribute to the study of totalitarian ideologies and regimes in Europe in the 20th century, especially based on primary archival and oral sources, on content analysis of the discourse of the totalitarian regimes, but also on new theoretical framework coming from such subfields of history as intellectual history, the history of ideas as well as political science, sociology and anthropology. The term totalitarian is understood here in a broader sense and refers to such political ideologies and regimes like Communism and Fascism (of which Nazism was one of the versions) that tried to impose a total control on society, including on private life. From this perspective it is less important that all these tentative to control all aspects of societal and individual life failed, it is more important the extent to which these regimes succeeded in their endeavours. Totalitarian covers also other regimes that practiced repressions and justified the use of violence at mass and individual level for political purposes (Gulag and Holocaust). It is particular interesting to differentiate the discourse and practices of the totalitarian regimes and democratic ones. The two types of regimes should be seen however not as essences, but rather as Weberian ideal-types. In other words, as Giovanni Sartori expressed it aptly, there are no pure democratic regimes and pure authoritarian/totalitarian regimes; there are regimes with democratic tendencies and regimes with authoritarian/totalitarian tendencies. In this sense, the articles and book reviews on topics related to the challenges from totalitarian and authoritarian regimes to democracy are also welcome.
Last, but not least, Dystopia will pay a special attention also to commonalities and differences between various national versions of Communism and Fascism, relations between Communist states, between Fascist regimes and between the former and the latter.

The articles are accepted in English, French and Russian. The recommended length of articles is minimum 30 000 signs without counting the space between words and maximum 60 000 signs. The references to sources should be made in footnotes, according to the following model: for chapters from a collective volume – Victor Zaslavsky, “Collapse of Empire – causes: Soviet Union”, in Karen Barkey and Mark von Hagen, eds., After Empire. Multiethnic Societies and Nation-Building: The Soviet Union and the Russian, Ottoman and Habsburg Empires, Boulder, Co.: Westview, 1997, p. 73; to the article from a journals: Rogers Brubaker, “Nationhood and the National Question in the Soviet Union and Post-Soviet Eurasia: An Institutional Account”, in Theory and Society, vol. 23, no. 1 (Feb., 1994), pp. 47-78.

The reviews of the books are accepted in all three above mentioned languages, and Romanian. As a rule, if the book is written in one language, the text of the review should be in another language in order making possible for researchers from one country to know the contributions coming from other countries. The recommended length of the review is 10 000 signs.

Editor-in-chief: Igor Casu, Ph.D. (Jassy University, Romania, 2000), Fulbright Alumnus (2000), director of the Center for the Study of Totalitarianism, Moldova State University, Vice Chairman of the Presidential Commission for the Study and Evaluation of the Communist Totalitarian Regime in the Republic of Moldova. Email: igorcasu@gmail.com