Self-determination and sovereignity in Europe 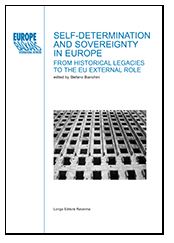 Self-determination and sovereignity in Europe. From historical legacies to the EU external role

This book focuses on self-determination and sovereignty, encompassing the findings of a two-year research project carried out by a group of Italian senior and junior scholars, most of them historians, but with different academic backgrounds and specializations. Surprisingly enough the topic has rarely been analyzed in Italian academic literature; thus the authors fill a crucial gap in national studies by systematically scrutinizing the historical dynamics of the European continent as a whole, in relation not only to nation-state construction since the end of WW1 and how the interconnections between freedom, peoples, minorities and power dramatically evolved during the last century, but also considering the new role played by EU integration processes since the end of the Cold War.
This original, dynamic and in-depth approach leads the authors to conclude that the persistence of historical legacies, in terms of political cultures of the nation-state, should be considered either in relation to policies implemented as part of the rationale of “nation-state sovereignty”, or in light of EU conditionality, the soft power applied to the EU’s Eastern neighbors, and the impact of the crisis the integration project has endured since 2005, when an increasingly assertive national component began to emerge. The mechanisms in action are actually twofold: they concern power, but also the idea of culture and coexistence. Nationalism has a fierce capacity to reassure groups in their hope to resist change, even when it is unavoidable. On the other hand, the cross-national mobility of peoples is challenging the well-rooted perceptions of unity of cultures and stability of borders, even though – historically – the existence of this “unity and stability” can be easily questioned.
Consequently, the book emphasizes the great responsibility of politics is this regard: at a time when different options are on the agenda, there are critical and far-reaching decisions to be made for all of Europe. National cultures and the national question in the form of political superiority, cultural homogeneity, and social exclusiveness are at stake. They can prevail once again, by imposing the failure of the integrative prospect, but the consequences might be unpredictable.