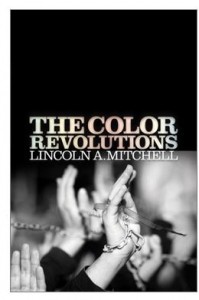 “Although analytic reflections on the Color Revolutions are accumulating, nothing available matches this book’s scope and depth. Mitchell’s account, consistently searching and thorough, balanced and judicious, leads to some surprising and weighty conclusions that challenge the existing conventional wisdom on the Color Revolutions. It will likely stand for many years as the definitive work on the subject.”—Thomas Carothers, Carnegie Endowment for International Peace

“The Color Revolutions represents an important contribution to our understanding of what actually happened at the time and provides extremely useful insight about what the future might—or might not—hold for other countries where the desire for democracy is great but the roots of democracy are weak.”—Richard Miles, former U.S. ambassador to Georgia, Azerbaijan, and Bulgaria

“Lincoln Mitchell has written a sober, concise, and thought-provoking analysis of the color revolutions in the former Soviet Union. As both a scholar and practitioner, he offers a unique and nuanced perspective on issues central to those revolutions and to regime change more broadly. His book is a must-read for anyone who wants a clear-eyed vision of the opportunities and pitfalls of democracy promotion in the twenty-first century.”—Lucan Way, Associate Professor of Political Science, University of Toronto

From late 2003 through mid-2005, a series of peaceful street protests toppled corrupt and undemocratic regimes in Georgia, Ukraine, and Kyrgyzstan and ushered in the election of new presidents in all three nations. These movements—collectively known as the Color Revolutions—were greeted in the West as democratic breakthroughs that might thoroughly reshape the political terrain of the former Soviet Union.

But as Lincoln A. Mitchell explains in The Color Revolutions, it has since become clear that these protests were as much reflections of continuity as they were moments of radical change. Not only did these movements do little to spur democratic change in other post-Soviet states, but their impact on Georgia, Ukraine, and Kyrgyzstan themselves was quite different from what was initially expected. In fact, Mitchell suggests, the Color Revolutions are best understood as phases in each nation’s long post-Communist transition: significant events, to be sure, but far short of true revolutions.

At a time when the Arab Spring has raised hopes for democratic development in the Middle East, Mitchell’s account of the Color Revolutions serves as a valuable reminder of the dangers of confusing dramatic moments with lasting democratic breakthroughs.