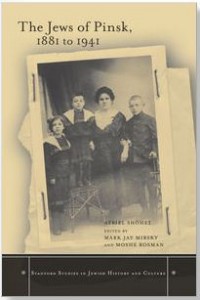 The Jews of Pinsk is the most detailed and comprehensive history of a single Jewish community in any language. This second portion of this study focuses on Pinsk’s turbulent final sixty years, showing the reality of life in this important, and in many ways representative, Eastern European Jewish community. From the 1905 Russian revolution through World War One and the long prologue to the Holocaust, the sweep of world history and the fate of this dynamic center of Jewish life were intertwined. Pinsk’s role in the bloody aftermath of World War One is still the subject of scholarly debates: the murder of 35 Jewish men from Pinsk, many from its educated elite, provoked the American and British leaders to send emissaries to Pinsk. Shohet argues that the executions were a deliberate ploy by the Polish military and government to intimidate the Jewish population of the new Poland. Despite an increasingly hostile Polish state, Pinsk’s Jews managed to maintain their community through the 1920s and 30s—until World War Two brought a grim Soviet interregnum succeeded by the entry of the Nazis on July 4th, 1941.