The Nation Should Come First 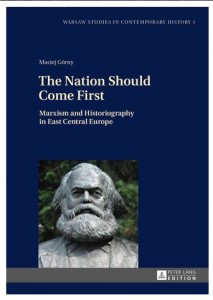 The Nation Should Come First. Marxism and Historiography in East Central Europe

By the second half of the 1940s, newly conquered nations of Central and Eastern Europe were expected to adjust multiple professions, including those related to the historical sciences, to the Soviet model. However, Marxism, soon to become the only acceptable methodology, was no longer understood in the same way as in Bolshevik Russia. Its Soviet variation borrowed heavily from the tradition of Russian historiography and the Russian national tradition. The variations formulated in the satellite countries were also less likely to break away from existing traditions than to revise and re-evaluate them, along with the perspectives on Russia’s role in the history of Central and Eastern Europe.

Maciej Górny is Assistant Professor at the Tadeusz Manteuffel Institute of History of the Polish Academy of Sciences in Warsaw. He specializes in East-Central European History of the nineteenth and twentieth century as well as in the history of historiography.