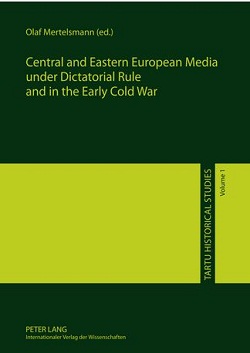 This volume presents case studies of media under socialist and fascist dictatorial regimes covering the period from the 1930s till the early Cold War. The regional focus is on Central and Eastern Europe. Fourteen authors from nine countries – among them historians, social scientists and media specialists – explore this interesting chapter in European media history. Media in dictatorships should construct an ‘image of the enemy’, transfer the propaganda of the regime, compete with alternative sources of information such as foreign radio broadcasting, deliver information, mobilise the population and, last but not least, entertain the audience. How media was controlled and how efficient this control was, were both important issues in this context.

Contents: Olaf Mertelsmann: Introduction – Chloé Stephenson: Fascist Interest in Soviet Cinema – Judith Devlin: A Case Study in Censorship: Stalin’s Early Film Image – Inge Marszolek: Exploring NS-Propaganda as Social Practice – Olaf Mertelsmann: Trophy Films and Western Radio Broadcasting as a Window to the World in Post-war Estonia – Roland Graf: Writing for a Political Minority, Gaining the Majority of Readers: the ‘Red Boulevard’ in Austria 1945-1959 – Marietta Stankova: The Media and the Onset of the Cold War in Bulgaria 1944-1947 – Peter Gross: «The Tip of the Lance»: Scinteia and the Establishment of Communism in Romania – Dorina Orzac: Romanian Mass Media in 1945-1950 – Jane Leftwich Curry: The Conundrums of Censorship: Poland in the 1940s and 1950s – Jürgen Wilke: Press Instructions as a Device of Media Control in the German Democratic Republic – Sirje Olesk: Writers’ Collaboration with the Soviet Authorities, and the Dominant Literary Journal in the Estonian SSR in the 1940s and 1950s – Andrej Skolkay: When Innocent Words were Sharp Swords: The Intellectual and Literary Press in the Early Years of Communism in Slovakia – Pavlína Binková: Black and White? – The Beginnings of Czechoslovak Television News Broadcasting – Indrek Treufeldt: Creating a New Communication Environment: The Birth of Television News in Soviet Estonia.

Olaf Mertelsmann is Associate Professor in Contemporary History at the University of Tartu (Estonia). He holds a doctorate from the University of Hamburg and has taught in Hamburg, Novosibirsk, and Tartu. He has published various monographs, edited volumes and articles.