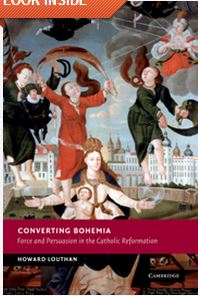 Converting  Bohemia
Force and Persuasion in the Catholic Reformation

Prior to the Thirty Years War, almost all of Bohemia’s population lay outside the Catholic fold, yet by the beginning of the eighteenth century the kingdom was clearly under Rome’s influence. Few regions in Europe’s history have ever experienced such a complete religious transformation; because of this, Bohemia offers a unique window for examining the Counter-Reformation and the nature of early modern Catholicism. Converting Bohemia presents a full assessment of the Catholic Church’s re-establishment in the Czech lands, arguing that this complex phenomenon was less a product of violence and force than of negotiation and persuasion. Ranging from art, architecture and literature to music, philosophy and hagiography, Howard Louthan’s study reintegrates the region into the broader European world where it played such a prominent role in the early modern period. It will be of particular interest to scholars of early modern European history, religion, and Reformation studies.