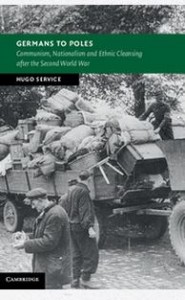 Germans to Poles
Communism, Nationalism and Ethnic Cleansing after the Second World War

At the end of the Second World War, mass forced migration and population movement accompanied the collapse of Nazi Germany’s occupation and the start of Soviet domination in East-Central Europe. Hugo Service examines the experience of Poland’s new territories, exploring the Polish Communist attempt to ‘cleanse’ these territories in line with a nationalist vision, against the legacy of brutal wartime occupations of Central and Eastern Europe by Nazi Germany and the Soviet Union. The expulsion of over three million Germans was intertwined with the arrival of millions of Polish settlers. Around one million German citizens were categorised as ‘native Poles’ and urged to adopt a Polish national identity. The most visible traces of German culture were erased. Jewish Holocaust survivors arrived and, for the most part, soon left again. Drawing on two case studies, the book exposes how these events varied by region and locality.