Embracing Democracy in the Western Balkans 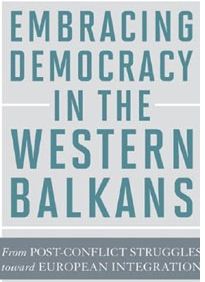 Embracing Democracy in the Western Balkans. From Postconflict Struggles toward European Integration

Cohen and Lampe offer a comparative, cross-regional study of the politics and economics of Serbia, Croatia, Bosnia, Macedonia, Montenegro, Kosovo, and Albania from 1999 until the present. It is during this period that the first wave of post-communist regime transition ended and the region became more deeply involved in the challenges of democratic consolidation. The authors explore the legacies of communist rule, the impact of incentives and impediments on reform, and the magnetic pull of European Union accession. The authors ask whether the Western Balkans are embracing democracy by creating functional, resilient institutions—governmental, administrative, journalistic, and economic—and fostering popular acceptance and trust in the legitimacy of those institutions.