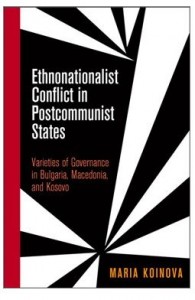 Ethnonationalist Conflict in Postcommunist States. Varieties of Governance in Bulgaria, Macedonia, and Kosovo

“A conceptually sophisticated and empirically rich study. . . . Koinova uses comparative case studies of Bulgarian, Macedonian and Serbian policies toward Kosovo to explore the level and duration of violence among groups. Internal conflict dynamics are critical, especially interactions between ethnic majorities and minorities in the final days of communist rule. Sequencing is also important, making outcomes contingent and dependent on agency. Koinova’s excellent book is an essential read for anyone interested in the Balkans, ethnic conflict and the study of politics more generally.”—Richard Ned Lebow, King’s College London

“In this nicely written and richly conceptualized comparative study, Maria Koinova compellingly argues that periods of “critical juncture”—such as state collapse, new state formation, or major regime change—engender enduring patterns of ethnonational conflict. These patterns emerge through the interactions of majority and minority political actors and international agents that are active participants of the formative period.”—Zsuzsa Csergő, Queen’s University

Ethnonationalist Conflict in Postcommunist States investigates why some Eastern European states transitioned to new forms of governance with minimal violence while others broke into civil war. In Bulgaria, the Turkish minority was subjected to coerced assimilation and forced expulsion, but the nation ultimately negotiated peace through institutional channels. In Macedonia, periodic outbreaks of insurgent violence escalated to armed conflict. Kosovo’s internal warfare culminated in NATO’s controversial bombing campaign. In the twenty-first century, these conflicts were subdued, but violence continued to flare occasionally and impede durable conflict resolution.

In this comparative study, Maria Koinova applies historical institutionalism to conflict analysis, tracing ethnonationalist violence in postcommunist states to a volatile, formative period between 1987 and 1992. In this era of instability, the incidents that brought majorities and minorities into dispute had a profound impact and a cumulative effect, as did the interventions of international agents and kin states. Whether the conflicts initially evolved in peaceful or violent ways, the dynamics of their disputes became self-perpetuating and informally institutionalized. Thus, external policies or interventions could affect only minimal change, and the impact of international agents subsided over time. Regardless of the constitutions, laws, and injunctions, majorities, minorities, international agents, and kin states continue to act in accord with the logic of informally institutionalized conflict dynamics.

Koinova analyzes the development of those dynamics in Bulgaria, Macedonia, and Kosovo, drawing on theories of democratization, international intervention, and path-dependence as well as interviews and extensive fieldwork. The result is a compelling account of the underlying causal mechanisms of conflict perpetuation and change that will shed light on broader patterns of ethnic violence.

Maria Koinova is Associate Professor of Politics and International Studies at Warwick University.