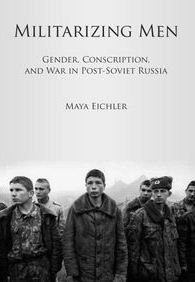 A state’s ability to maintain mandatory conscription and wage war rests on the idea that a “real man” is one who has served in the military. Yet masculinity has no inherent ties to militarism. The link between men and the military, argues Maya Eichler, must be produced and reproduced in order to fill the ranks, engage in combat, and mobilize the population behind war.

In the context of Russia’s post-communist transition and the Chechen wars, men’s militarization has been challenged and reinforced. Eichler uncovers the challenges by exploring widespread draft evasion and desertion, anti-draft and anti-war activism led by soldiers’ mothers, and the general lack of popular support for the Chechen wars. However, the book also identifies channels through which militarized gender identities have been reproduced. Eichler’s empirical and theoretical study of masculinities in international relations applies for the first time the concept of “militarized masculinity,” developed by feminist IR scholars, to the case of Russia.