All This is Your World

Home » Baltico » All This is Your World 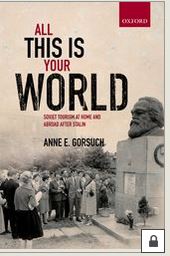 All This is Your World: Soviet Tourism at Home and Abroad after Stalin

In the Khrushchev era, Soviet citizens were newly encouraged to imagine themselves exploring the medieval towers of Tallinn’s Old Town, relaxing on the Romanian Black Sea coast, even climbing the Eiffel Tower. By the mid-1960s, hundreds of thousands of Soviet citizens each year crossed previously closed Soviet borders to travel abroad. This book explores the gradual integration of the Soviet Union into global processes of cultural exchange in which the Soviet Union after Stalin increasingly, if anxiously, participated in the transnational circulation of people, ideas, and items. The classic emblem of aggressive internationalism under Stalin was that of the hammer and sickle super-imposed on the world. Under Khrushchev, the new motif, as displayed on postal stamps, was of a Soviet jet touching down in Asia, Europe, and North America. The book begins with a domestic tour of the Soviet Union in late Stalinism, moving outwards in concentric circles to explore travel to the inner abroad of Estonia, to the near abroad of eastern Europe, and to the capitalist West. It returns home again with a discussion of Soviet films about foreign travel. All this is your World is situated at the intersection of a number of topics of current scholarly and popular interest: the history of tourism and mobility; the cultural history of international relations, specifically the Cold War; the history of the Soviet Union after Stalin. It also offers a new perspective on our view of the continent as a whole by exploring the Soviet Union’s relationship with both eastern and western Europe through, in this case, the experience of Soviet tourists.