CfP: Networks, Practices and Dynamics of Socialization in European diplomacy from 1919 to today

Home » Austria-Ungheria » CfP: Networks, Practices and Dynamics of Socialization in European diplomacy from 1919 to today 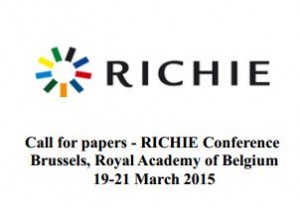 Networks, Practices and Dynamics of Socialization in European diplomacy from 1919 to today

This international colloquium of the network Richie will be held in Brussels (Royal Academy of Belgium), from 19 till 21 March 2015. It will concern the following question : “Networks, Practices and Dynamics of Socialization in European diplomacy from 1919 to today”. Multidisciplinary, he aims to be open to the historians, to the political analysts, to the anthropologists and to the sociologists. The main langage of the colloquium will be French, but the communications in English are also welcome.

After the First World War, diplomats became the key-figures of a new International order that was meant to be founded on new principles: transparency, cooperation, arbitrage and international law. However, it meant an erosion of their monopoly over foreign affairs as new “technical” experts would now play a major role along the traditional actors of diplomacy: international lawyers, academics, journalists, senior officials seconded to multilateral organisations, or international bankers. These actors were more and more organized in international networks: their activities were impacted by technological revolutions in transport and communication, and by the rising influence of mass media. The timing of the negotiator’s job was accelerating, while diplomats were increasingly monitored by public opinion and by their political masters.

The new diplomacy was mainly taking place in the European capitals and in Geneva. The League of Nations became a prominent forum for diplomatic encounters and socialization at the time of the attempted “Collective Security”, and a fertile ground for the first projects of European Union. Those professional and personal connections between foreign policy actors witnessed a new momentum after 1945 when Western European stated started to organize their close cooperation. From the 1970s onwards, the European Political Cooperation (EPC) provided an official framework, but diplomatic socialization existed informally between individuals, via various forms of connection (family, financial, intellectual or artistic).

Exploring those formal and informal networks will set a new light on the diplomatic machine in general, and on decision-making in particular. To what extent did the recourse to those networks contribute to the settlement of some crises? Did national Ministries for Foreign Affairs contribute to accelerate or to resist that process of networking among diplomatic agents? Do the latter usually share common representations of Europe? To what extent did the rise of multilateral, public and economic diplomacy impact diplomatic practices?

This call for papers requests contributions that will resort to new approaches to analyse activities of foreign policy actors from 1919 to today, favouring a transnational and pan-European focus. Different (and non-exclusive) research questions may be followed:

2. Perceptions/Visions of a United Europe for Foreign policy actors:

Effects of generations, political involvement, national or transnational divisions over the European project; resistance to the integration process; confronting principles with reality: the issues/difficulties of diplomatic cooperation at the European level.

Personal and family connections between European diplomats, including the periods of war (how contacts were maintained – or not- in belligerent countries – via third or neutral countries during the two World Wars; diplomatic connections within the Soviet bloc during the Cold War); the role of contact groups in the settlement of local/regional conflict, such as the Balkans); the role of informal forums in the networking of Foreign policy actors (associations, journals, European movements)

4. New diplomatic practices in the 1970? Convergence and mutualisation of national diplomacies: development of a European diplomatic milieu within the institutions of the ECC/EU and in their delegations abroad. The rise of public diplomacy and new proactive forms of commercial and economic diplomacy; new division of labour and mutualisation between bilateral embassies and the ECC/EU delegations; the advent of the High Representative for the CFSP as a new diplomatic figure; sharing of diplomatic practices with European countries of the ex-Soviet bloc; development of the European External Action Service (EEAS)

Applicants are expected to submit abstract of papers by Tuesday 30 September 2014 at email address: colldiplo2015@gmail.com
Abstracts should not exceed 500 words and should be accompanied by a short biographical note, a CV and a list of publications.
Notifications to successful applicants will be sent by 1 December 2014. Final papers are expected to be produced by 15 February 2015.
The accommodation costs in Brussels are paid.Requests for financial grants covering a partial or total amount of travelling expenses can be submitted and will be considered on a case-by-case basis
5. Organizing Committee