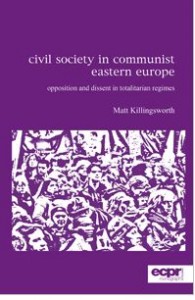 As well as promoting debates about liberal democracy, the dramatic events of 1989 also brought forth a powerful revival in the interest of the notion of civil society. This revival was reflected mainly in two broad tracts of literature. The first was primarily focused on the events surrounding the Solidarity movement in Poland and the tumultuous events of 1980–81. The second was concerned with the ‘Velvet Revolutions’ more broadly. Following the events of 1989, there appeared a number of works sharing the common central argument that civil society played a key role in the overthrow of these Communist regimes in 1989.

Civil Society in Communist Eastern Europe presents three broad arguments, all of which reject the way civil society has been applied in the analysis of opposition and dissent in totalitarian Czechoslovakia, the GDR and Poland. First, it argues that the totalitarian nature of the Soviet-type regimes means that it was not possible for a genuine civil society to exist. Second, the civil society paradigm, as it has been applied to opposition and dissent in Soviet-type regimes in Eastern Europe, lacks analytical rigour. Third, the book argues that the dominant liberal interpretation of dissenting opposition in Soviet-type regimes is both politically and morally flawed. “In this feisty and original book, Matt Killingsworth argues strongly against the conventional view of civil society’s role in bringing down Communism in Europe, arguing that the concept of a ‘totalitarian public sphere’ better describes developments in the late-Communist era. This book will lead to renewed controversy on what civil society is and what its role – if any – was in late-Communist societies.” Professor Leslie Holmes
School of Social and Political Sciences, University of Melbourne

“Matt Killingsworth’s exploration of dissent in communist Czechoslovakia, the GDR and Poland offers a fundamental reconceptualisation of the nature of these regimes. His concept of the “totalitarian public sphere”, as a reworking of Habermas’ “bourgeois public sphere”, opens up the debate, by offering a more flexible, dynamic image of what totalitarian rule was. Grounded in a detailed study of how dissident groups functioned in this environment it raises important questions about the public/private sphere, public/popular opinion, notions of individual and group identity, and strategies of regime legitimation. This is a major theoretical contribution to the study of communist regimes which highlights inherent limits to state power and the way in which issues of power were contested.” Professor E. A. Rees
Centre for Russian and East European Studies, University of Birmingham