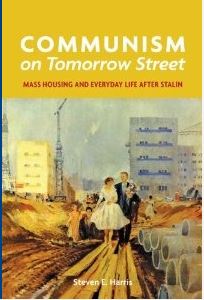 This fascinating and deeply researched book examines how, beginning under Khrushchev in 1953, a generation of Soviet citizens moved from the overcrowded communal dwellings of the Stalin era to modern single-family apartments, later dubbed khrushchevka. Arguing that moving to a separate apartment allowed ordinary urban dwellers to experience Khrushchev’s thaw, Steven E. Harris fundamentally shifts interpretation of the thaw, conventionally understood as an elite phenomenon.

Harris focuses on the many participants eager to benefit from and influence the new way of life embodied by the khrushchevka, its furniture, and its associated consumer goods. He examines activities of national and local politicians, planners, enterprise managers, workers, furniture designers and architects, elite organizations (centrally involved in creating cooperative housing), and ordinary urban dwellers. Communism on Tomorrow Street also demonstrates the relationship of Soviet mass housing and urban planning to international efforts at resolving the “housing question” that had been studied since the nineteenth century and led to housing developments in Western Europe, the United States, and Latin America as well as the USSR.

Steven E. Harris is an associate professor of history at the University of Mary Washington. He was a research scholar at the Wilson Center’s Kennan Institute in 2003–2004.