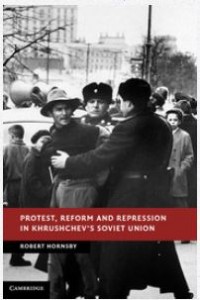 Protest, Reform and Repression in Khrushchev’s Soviet Union explores the nature of political protest in the USSR during the decade following the death of Stalin. Using sources drawn from the archives of the Soviet Procurator’s office, the Communist Party, the Komsomol and elsewhere, Hornsby examines the emergence of underground groups, mass riots and public attacks on authority as well as the ways in which the Soviet regime under Khrushchev viewed and responded to these challenges, including deeper KGB penetration of society and the use of labour camps and psychiatric repression. He sheds important new light on the progress and implications of de-Stalinization, the relationship between citizens and authority and the emergence of an increasingly materialistic social order inside the USSR. This is a fascinating study which significantly revises our understanding of the nature of Soviet power following the abandonment of mass terror.