Public Relations of the Cold War 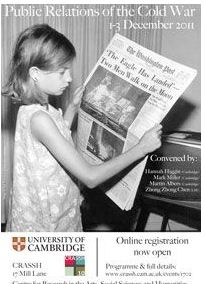 Summary
The conference seeks to examine the ‘selling’ of Cold War-motivated policies to national audiences during the second half of the twentieth century. At its core, the Cold War was a global ideological conflict, pitting two uncompromising and often messianic systems against one another, systems which both rejected traditional European imperialism and which claimed to provide the ultimate solution to problems of global instability and human inequality.

However, stemming from dual foundations of ‘making the world safe for democracy’ on one hand and the Marxist theory of false consciousness on the other, ideological diversions appeared on both sides of the Cold War divide in order to confront changing international climates and maintain the respective ‘Grand Strategies’ of global transformation in line with each side’s chosen systems of government and society.

When faced with complicated issues, such as internment, foreign intervention or more general limits to human rights, the decisions were often inconsistent with previous proclamations and in stark contrast to the guiding principles of the system. In these instances (for example, the support for a dictator like Pinochet or the Soviet invasion of Czechoslovakia) justifications for questionable actions were created and corresponding discussions held to decide which decisions could be made public and which must remain classified. By examining these controversial issues, one can not only understand how official policy was transmitted through the mass media, but also dissect the relationship between political ideology and the larger issue of Grand Strategy.

While growing attention is paid to the public diplomacy of the Cold War, less attention is paid specifically to how governments sold policies to their own domestic public.  This conference aims to stimulate innovative and interdisciplinary thinking and dialogue on this topic and to reach out to new networks of interest and new publics.
Programma

Please register via the link on the right.