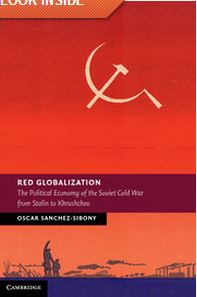 Was the Soviet Union a superpower? Red Globalization is a significant rereading of the Cold War as an economic struggle shaped by the global economy. Oscar Sanchez-Sibony challenges the idea that the Soviet Union represented a parallel socio-economic construct to the liberal world economy. Instead he shows that the USSR, a middle-income country more often than not at the mercy of global economic forces, tracked the same path as other countries in the world, moving from 1930s autarky to the globalizing processes of the postwar period. In examining the constraints and opportunities afforded the Soviets in their engagement of the capitalist world, he questions the very foundations of the Cold War narrative as a contest between superpowers in a bipolar world. Far from an economic force in the world, the Soviets managed only to become dependent providers of energy to the rich world, and second-best partners to the global South.