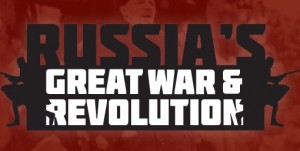 As the one-hundredth anniversary of the First World War approaches, public attention will increasingly turn to The Great War’s significance in shaping human history. Centennial commemorations will provide scholars with a singular opportunity to engage and educate general audiences regarding the conflict and its meanings. This is an opportunity of particular importance for historians of Russia.

For most of the twentieth century Russia’s Great War was a historical afterthought. Overshadowed by the Bolsheviks’ revolution, Civil War, and consolidation of power, the War took a back seat within professional scholarship as both Soviet and Western experts focused their energy on explaining the origins and rise of Russian Communism. In recent years a new generation of researchers has begun to re-examine and re-evaluate the significance and meaning of the War. Buttressed by new archival findings and freed from the ideological baggage of earlier historical debates they have begun to analyze Russia’s Great War not as a prelude to “Red October,” but as the fulcrum which set into motion a chain of events that transformed Eurasia and much of the world.

Russia’s Great War and Revolution is a decade-long multinational scholarly effort that aims to fundamentally transform understanding of Russia’s “continuum of crisis” during the years 1914-1922. The project incorporates new research methods, archival sources, and multiple media formats to re-conceptualize critical concepts and events and to increase public awareness of Russia¹s contributions to the history of the twentieth century.