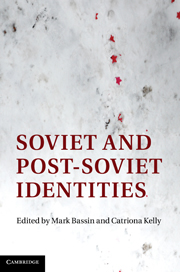 Edited by Mark Bassin and

Since the Soviet Union collapsed in 1991, questions of identity have dominated the culture not only of Russia, but of all the countries of the former Soviet bloc. This timely collection examines the ways in which cultural activities such as fiction, TV, cinema, architecture and exhibitions have addressed these questions and also describes other cultural flashpoints, from attitudes to language to the use of passports. It discusses definitions of political and cultural nationalism, as well as the myths, institutions and practices that moulded and expressed national identity. From post-Soviet recollections of food shortages to the attempts by officials to control popular religion, it analyses a variety of unexpected and compelling topics to offer fresh insights about this key area of world culture. Illustrated with numerous photographs, it presents the results of recent research in an accessible and lively way.
Contents