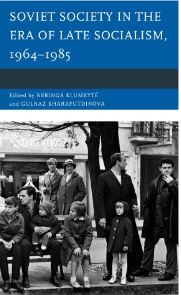 What did it mean to be a Soviet citizen in the 1970s and 1980s? How can we explain the liberalization that preceded the collapse of the USSR? This period in Soviet history is often depicted as stagnant with stultified institutions and the oppression of socialist citizens. However, the socialist state was not simply an oppressive institution that dictated how to live and what to think—it also responded to and was shaped by individuals’ needs.

In Soviet Society in the Era of Late Socialism, 1964–85, Neringa Klumbyte and Gulnaz Sharafutdinova bring together scholarship examining the social and cultural life of the USSR and Eastern Europe from 1964 to 1985. This interdisciplinary and comparative study explores topics such as the Soviet middle class, individualism, sexuality, health, late-socialist ethics, and civic participation. Examining this often overlooked era provides the historical context for all post-socialist political, economic, and social developments.

Neringa Klumbyte is an assistant professor at Miami University (Ohio).

Gulnaz Sharafutdinova is an associate professor of political science and international studies at Miami University (Ohio).