Home » Baltico » The Oxford Handbook of the Cold War 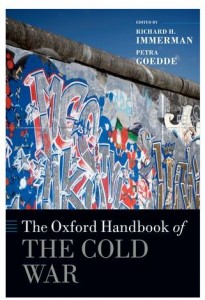 Thirty four essays from an international team of scholars providing a broad reassessment of the cold war based on the latest research in international history
Evaluates the cold war within the wider context of global political, economic, social, and cultural developments
Calls into question orthodox ways of ordering cold war chronology and presents new insights into the global dimension of the conflict
A rich and diverse account of the ways in which the cold war should be positioned within the broader context of world history

The Oxford Handbook of the Cold War offers a broad reassessment of the period war based on new conceptual frameworks developed in the field of international history. Nearing the 25th anniversary of its end, the cold war now emerges as a distinct period in twentieth-century history, yet one which should be evaluated within the broader context of global political, economic, social, and cultural developments.

The editors have brought together leading scholars in cold war history to offer a new assessment of the state of the field and identify fundamental questions for future research. The individual chapters in this volume evaluate both the extent and the limits of the cold war’s reach in world history. They call into question orthodox ways of ordering the chronology of the cold war and also present new insights into the global dimension of the conflict.

Even though each essay offers a unique perspective, together they show the interconnectedness between cold war and national and transnational developments, including long-standing conflicts that preceded the cold war and persisted after its end, or global transformations in areas such as human rights or economic and cultural globalization. Because of its broad mandate, the volume is structured not along conventional chronological lines, but thematically, offering essays on conceptual frameworks, regional perspectives, cold war instruments and cold war challenges. The result is a rich and diverse accounting of the ways in which the cold war should be positioned within the broader context of world history.

Richard H. Immerman is Professor and Edward J. Buthusiem Family Distinguished Faculty Fellow in History at Temple University and the Marvin Wachman Director of its Center for the Study of Force and Diplomacy. He currently chairs the Historical Advisory Committee to the United States’ Department of State.

Petra Goedde is Associate Professor of History at Temple University.