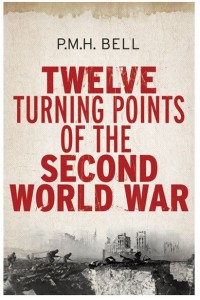 The Battle of Britain. Pearl Harbor. Stalingrad. D-Day. These defining events of the Second World War exemplify both the immense heroism and the grievous costs of global conflict. They are the tense, thrilling moments that had the potential to swing the war in favor of either side and in turn change the course of history. In this gripping new look at the twentieth century’s most crucial conflict, historian P. M. H. Bell analyzes twelve unique turning points that determined the character and the ultimate outcome of the Second World War.

Be they military campaigns, economic actions, or diplomatic summits, Bell’s twelve turning points span the full breadth of the war, from the home front to the front line. Many are familiar—Barbarossa and Hiroshima among them—while sections on war production, the Atlantic convoy system, and the conferences at Tehran and Yalta emphasize the importance of the combatants’ actions off the battlefield. Through these keenly narrated episodes, Bell reveals how the Allied and Axis powers achieved their greatest successes and stumbled into their strategic failures, inviting us to think about the Second World War in a fresh, stimulating way. Ultimately, his close study of these dozen turning points reminds us, often terrifyingly, how easily things might have turned out differently.

P. M. H. Bell was Reader in history at the University of Liverpool and is the author of many books, including The Origins of the Second World War in Europe. He lives in Surrey, England.