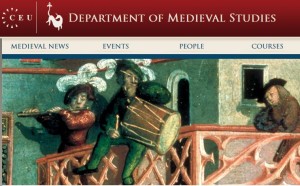 The Department of Medieval Studies at CEU invites proposals for papers by senior scholars and young academics alike for the two-day conference “A Forgotten Region? East Central Europe in the Global Middle Ages”.

Shortly before the political changes in the late 1980s, East Central Europe benefitted from increasing attention by both historians and the general public inside and outside the region. This helped East Central Europe reinforce its identity in the European context, but this heuristic rediscovery does not seem to have left a lasting imprint on the perception of the European Middle Ages. Instead, initiatives towards a new conceptualisation of the Global Middle Ages have mainly concentrated on the relationship between Western Europe and other continents.

This conference will challenge this view and pose the question: Can the Global Middle Ages be conceived without taking the central and eastern part of the old continent into account. Or, to put it differently: How can the distinguished consideration of this region contribute to or challenge a new interpretation of the Middle Ages beyond its traditional limits in space and time and beyond the established conceptual schemes?

We offer two possible approaches: contacts and comparisons.
Under ‘contacts’ we will focus on transfers and interactions within a shared space or across boundaries:

What kind of persons, ideas, institutions, cultural and material goods found their way to other parts of the world from East Central Europe or with the mediation of this region?
What motivated such transfers and interactions?
Can the approach of “histoire croisée” bring new insights?

Under ‘comparisons’ we will discuss whether similar processes can be identified and analyzed in state, church, and cultural development among “peripheries” in Europe or in other continents on the one hand, and in centers of power and influence in the same time period on the other hand.

Or, should comparable phenomena in political, legal, religious, and technical development or in the formation of settlements and communities be less bound to time-frames and analyzed structurally?
What kind of comparisons make sense and bring us closer to explaining particular similarities or differences, considering the disparity of source materials?
Can we agree upon a new critical methodology of comparative history at all?

The Department of Medieval Studies at CEU invites proposals for papers by senior scholars and young academics alike for this two-day conference. The main themes will be introduced by Felicitas Schmieder (FernUniversität in Hagen), János M. Bak (CEU), and Florin Curta (University of Florida). Colleagues are also invited to participate in the discussions without necessarily presenting a paper. Travel stipends are available on a competitive basis. Please send your proposal and an abstract of c. 200 words to forgottenregion@gmail.com or inform us about your intention to participate at the same address by 22 November 2013.
Organizer

Department of Medieval Studies at CEU