Mikhail Gorbachev was the most significant political leader globally of the second half of the 20th century and one of the greatest reformers in Russian history. By the time he resigned as president of the USSR during its final throes, he had played the decisive role in making Russia a freer country than it had ever been. The new tolerance and liberties at home, together with the transformation of Soviet foreign policy, emboldened the peoples of eastern and central Europe to send their communist rulers packing and to reject Moscow’s overlordship. As Gorbachev was also the most pacific of all Soviet – perhaps of all Russian – leaders, not a shot was fired by a Soviet soldier while the Warsaw Pact countries achieved independence from 1989, when the Berlin Wall fell in November that year, or when Germany was reunited in 1990.

There is a popular fallacy in the west that the Soviet Union had reached crisis point by 1985, that the Communist party’s politburo chose Gorbachev as general secretary because he was a reformer, and that therefore he had no option but to undertake radical changes. An authoritarian regime is in crisis when its laws and commands are no longer obeyed, when there is persistent mass protest and, in particular, when such social unrest is accompanied by open splits within the political elite.

But none of this was present in 1985 – in fact, such unrest did not occur until a few years into Gorbachev’s perestroika reforms. Far from crisis leaving no option but reform, it was radical reform that provoked crisis. The new freedoms enabled the repressed grievances of 70 years, including ethno-national grievances, to rise to the surface of political life.

The idea that poor economic performance in the mid-1980s had forced reform through is belied not only by the country’s quiescence under Gorbachev’s predecessor, Konstantin Chernenko, but the fact that Gorbachev prioritised political over economic reform. This did nothing to improve conditions in the command economy – for in the new political climate, commands could be circumvented or ignored, and people became free not merely to grumble in private but to complain in public about queues and shortages.

It was as late as 1990 that Gorbachev embraced a market economy in principle, stressing that it should be of a social democratic type. However, by then he had lost much of his earlier political authority and did not take the risk of moving to market – and higher – prices for basic foodstuffs and utilities, so the Soviet economy ended in limbo, neither centrally controlled nor market-driven. 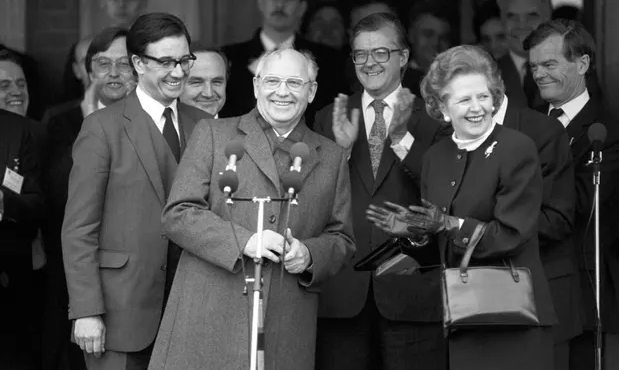 Yet Gorbachev’s political reforms were extraordinarily bold. He had an unusually open mind for any political leader, never mind a Soviet Communist party general secretary. The glasnost (greater transparency) Gorbachev advocated from the outset of his leadership developed, with his blessing, into a freedom of speech and, increasingly, of publication. By 1989, literary works, whose very possession in underground or foreign editions had been a criminal offence, were published in Moscow in huge print-runs – among them George Orwell’s Nineteen Eighty-Four and even Aleksandr Solzhenitsyn’s The Gulag Archipelago. Dissidents were released from prison and exile and the rehabilitation of those unjustly repressed in the past (begun under Nikita Khrushchev and abandoned by Leonid Brezhnev) was resumed. Gorbachev encouraged a new freedom of communication across frontiers. That included an end to the blocking of foreign broadcasts and a developing freedom of travel and of emigration.

During less than seven years in the Kremlin, Gorbachev achieved the kinds of reforms that no previous Soviet leader – or any other potential successor from Chernenko’s politburo – would have contemplated. The changes were also beyond the wildest dreams of western leaders in 1985 (as Margaret Thatcher acknowledged) and of Soviet reformers at that time, as I know from my conversations with them.

That did not prevent some of those same reformers castigating Gorbachev by 1990 for his supposed “half- measures” and transferring their allegiance to Boris Yeltsin.

He began in 1985 as a communist reformer. By 1988 he had turned into a systemic transformer. As he put it in 1996: “Until 1988 I had the same illusions as previous reformers. I believed that the system could be improved. In 1988 I realised we needed systemic reform. The system had to be replaced.” That was not merely a retrospective judgment. Addressing a closed meeting of regional party secretaries in April 1988, Gorbachev asked: “On what basis do 20 million (party members) rule 200 million?” He answered his own question: “We conferred on ourselves the right to rule the people!”

Two months later he startled most delegates at the 19th party conference by announcing that contested elections for a new legislature with real powers would take place not later than the spring of the following year – and in March 1989 they were duly held. They marked an end to “democratic centralism”, for party members were allowed to compete against one another on fundamentally different policy platforms. This was merely a first step in trial-and-error democratisation, but after it, the Soviet Union could never be the same again.

That the Soviet communist system ceased to exist was not an unintended consequence of Gorbachev’s actions, for he and his most likeminded associates consciously dismantled that system.

What Gorbachev did not intend was the dissolution of the Soviet state. He strove to keep as many republics as possible within a “renewed union” by negotiation and voluntary agreement and turn what had previously been a pseudo-federation into a genuinely federal state. He failed in that endeavour, but resisted calls from party and state officials, including the leadership of the KGB, to use the ample coercive power at their disposal to maintain the union by force.

Gorbachev was in failing health in recent years and saddened by the way his greatest achievements – using the office of party leader to dismantle the very system that was the source of his power, and playing the most important part in ending the cold war – were being destroyed. As a boy in a peasant household in southern Russia, he had been especially close to his Ukrainian maternal grandparents. War between Russia and Ukraine in 2022 was for him the ultimate devastating blow. In one of his last interviews a few years ago, he was asked what he thought his epitaph should be. His answer was: “We tried”.

I write from Ukraine, where I’ve spent much of the past six months, reporting on the build-up to the conflict and the grim reality of war. It has been the most intense time of my 30-year career. In December I visited the trenches outside Donetsk with the Ukrainian army; in January I went to Mariupol and drove along the coast to Crimea; on 24 February I was with other colleagues in the Ukrainian capital as the first Russian bombs fell.

This is the biggest war in Europe since 1945. It is, for Ukrainians, an existential struggle against a new but familiar Russian imperialism. Our team of reporters and editors intend to cover this war for as long as it lasts, however expensive that may prove to be. We are committed to telling the human stories of those caught up in war, as well as the international dimension. But we can’t do this without the support of Guardian readers. It is your passion, engagement and financial contributions which underpin our independent journalism and make it possible for us to report from places like Ukraine.

If you are able to help with a monthly or single contribution it will boost our resources and enhance our ability to report the truth about what is happening in this terrible conflict.