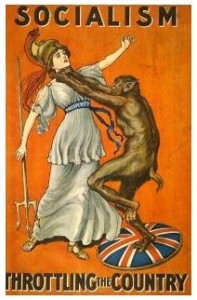 ‘[A]t no time since 1917 has anti-communism failed to occupy a major, even a central, place in the politics and policies of the capitalist world.’ – Ralph Miliband & Marcel Liebman

‘Perhaps the truth is that real leftism today can only be anti-Communist.’ – Arthur Koestler

‘Anti-anticommunism — the wish to avoid giving aid and comfort to cold warriors before 1989, and End-of-History triumphalists since — has crippled political thinking in the Labor and Social Democratic movements for decades; in some circles it still does.’ – Tony Judt

Some two decades after the fall of the Soviet Union, this symposium will explore the complex literary and cultural legacies of one of the twentieth century’s most influential and under-theorised political philosophies. Anti-communism had a shaping influence on the development of twentieth-century Western liberalism and social democracy as well as providing intellectual justifications for McCarthyism and the jingoism of the Cold War Right. It was a key element of Nazism, but also of twentieth-century anarchism. Its relation to literary and artistic culture was equally complicated.

Rather than suggesting that there was a unified anti-communist aesthetic, the speakers at this symposium will examine the historical and formal specificity of anti-communist modes of writing, ranging from avant-garde to realist-documentary forms, and from the defiantly heterodox experiments by avant-gardists in the 1920s and 1930s to the condemnation of modernist writing as ‘proto-communist’ by American conservatives after 1945.

The symposium brings together an exciting group of scholars in order to explore a widespread public debate that took place among writers and intellectuals across the political spectrum and in a variety of media. The diversity of literary anti-communism is reflected in the range of writers considered at this symposium, from critical fellow travellers and chastened 1930s radicals to exiles, émigrés, and Cold War Conservatives. Writers to be discussed will include Emma Goldman, Wyndham Lewis, Rebecca West, George Orwell, Stephen Spender, Edward Upward, Ayn Rand, Vladimir Nabokov, Arthur Koestler, Doris Lessing, and Hannah Arendt. The speakers will illustrate the pervasiveness of anti-communist attitudes from a variety of disciplinary perspectives, taking into account critical arguments about anti-communism that were conducted in literary and political journals (including Partisan Review, Encounter, and others) and in the media, as well as the more extreme and more visible instances of anti-communist polemic and propaganda.

This symposium is supported by the Leverhulme Trust and the University of East Anglia.
Programm