Cold War Culture. The Global Conflict and its Legacies in Germany since 1945

Home » DDR » Cold War Culture. The Global Conflict and its Legacies in Germany since 1945 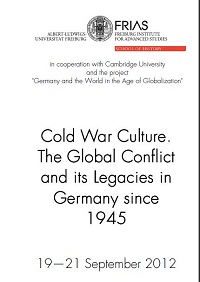 Workshop on “Cold War Culture. The Global Conflict and its Legacies in Germany since 1945“

Freiburg Institute for Advanced Studies (FRIAS), in cooperation with Cambridge University and the project “Germany and the World in the Age of Globalization”, organized by Ulrich Herbert (FRIAS) and Arvid Schors (University of Freiburg)
19th September 2012 – 21st September 2012, Freiburg im Breisgau, FRIAS, Albert-Ludwigs-Universität Freiburg, Albertstr. 19
For a long time Cold War historians have primarily focused on the diplomatic history of the global confrontation. Recent years, however, have seen a significant diversification of thematic perspectives and methodological approaches. A great number of studies have further explored the various effects this political conflict had on the many different societies around the globe. Most prominent amongst these societies that were affected by the Cold War are the two Germanies that existed after 1945.

The workshop will be held at the FRIAS School of History in cooperation with the University of Cambridge, the Free University of Berlin and the University of Konstanz. Its main goal is to discuss current research on Cold War Germany from various thematic perspectives and to raise new questions on the societal impact of this global conflict. By approaching the Cold War as an all-encompassing, dichotomous cultural condition the workshop will highlight historically diverse phenomena such as the role of experts and elites, criminology and constitutional reform, development policies, the mass media and consumerism.

Guests are welcome. If you are interested in participating, please register by sending an email to Jasmin Gauch (jasmin.gauch@frias.uni-freiburg.de).