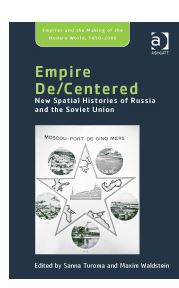 In 1991 the Soviet empire collapsed, at a stroke throwing the certainties of the Cold War world into flux. Yet despite the dramatic end of this ‘last empire’, the idea of empire is still alive and well, its language and concepts feeding into public debate and academic research.

Bringing together a multidisciplinary and international group of authors to study Soviet society and culture through the categories empire and space, this collection demonstrates the enduring legacy of empire with regard to Russia, whose history has been marked by a particularly close and ambiguous relationship between nation and empire building, and between national and imperial identities.

Parallel with this discussion of empire, the volume also highlights the centrality of geographical space and spatial imaginings in Russian and Soviet intellectual traditions and social practices; underlining how Russia’s vast geographical dimensions have profoundly informed Russia’s state and nation building, both in practice and concept.

Combining concepts of space and empire, the collection offers a reconsideration of Soviet imperial legacy by studying its cultural and societal underpinnings from previously unexplored perspectives. In so doing it provides a reconceptualization of the theoretical and methodological foundations of contemporary imperial and spatial studies, through the example of the experience provided by Soviet society and culture.