A hopeful moment in Russian history dies with the former Soviet leader.

Mikhail Sergeyevich Gorbachev, who Russian media reports say died today at age 91 after a long illness, was a rare bright spot in the tragic, grim, blood-splattered history of Russia. Even at his worst moments, he exuded warmth and sparkled with optimism and humor. A passionate political animal, he refused to cling to power for power’s sake.

Such qualities gave Gorbachev the determination to push forward with the policies of perestroika and glasnost—to reform the Soviet Union’s top-down economic system, make its governance more transparent, and allow people more freedom and civil rights. Those qualities also perhaps were the ones he needed to bring a peaceful end to the Cold War—his greatest achievement.

His place in Russian history, however, is more complex—and still to be determined. Russian nationalists and stalwarts of the old order generally view him as a dupe or a traitor, in large part because he oversaw the collapse of the Soviet Union. Other Russians and members of the former Soviet bloc praise him as a farsighted liberator who tried to free them from the yoke of corrupt totalitarianism.

For his part, Gorbachev, who suffered from the sort of cheerful vanity that led him to speak of himself in the third person, told biographer William Taubman that “Gorbachev is hard to understand.” 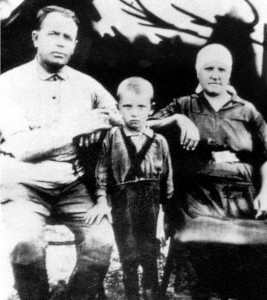 He was certainly a product of his times: A child of Russian-Ukrainian peasants, he achieved a Soviet higher education (taught by a pre-communist cohort of intellectuals) and came of age amid a mood of “joy with tears” after Russia’s victory against Germany in World War II. The Gorbachevs, like millions of other Russians, had to rise up from the ruins of war, famine, and state-inflicted terror yet were overjoyed to be alive and aspired to a better future.

Gorbachev met his wife, Raisa, a student of philosophy, in a dormitory of the Moscow State University during the last year of former Soviet leader Joseph Stalin’s life. She became his indispensable soulmate throughout his political career—the confidant he turned to when, surrounded by rivals, enemies, and duplicitous allies, he needed advice he could trust. 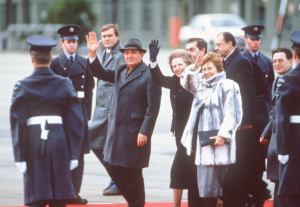 Gorbachev’s early life prepared him little for the monumental task of ruling and reforming a giant empire. A peasant from Privolnoye (translated as “Freeplace”) in the North Caucasus, he ascended within the Communist Party of the Soviet Union, mostly with a focus on agriculture. By chance, Yuri Andropov of the KGB met him and grew to like him. Once Andropov became general secretary of the Communist Party and supreme leader of the Soviet Union, he made Gorbachev his heir apparent.

Andropov, however, died before Gorbachev could learn the intricacies of foreign affairs, security policy, economics, and finance. This lack of background and experience briefly delayed his ascent to power—Konstantin Chernenko took over as general secretary upon Andropov’s death, only to die himself 13 months later—and it would haunt Gorbachev when his turn came to rule.

In March 1985, the night before the Politburo “voted” to make Gorbachev the general secretary of the Communist Party—it was a done deal in advance—Gorbachev took a walk with Raisa, who wondered aloud, “Do you really need this?” Gorbachev, according to Taubman’s biography, responded that he had to take responsibility. “We just can’t go on living like this,” he said, referring to the debilitating stagnation and rot of the Soviet system.

Gorbachev rightly saw a gap between communist ideology and Soviet reality, and he initially believed it could be bridged without taking radical steps. Later, he apologetically recalled his mindset in 1985: “One could not, naturally, liberate one’s consciousness [all] at once from previous blinkers and chains.”

During his first year in office, he plunged into the job with idealism and enthusiasm. Three years later, he released radical economic, political, and constitutional reforms. And during the last two years of his tenure, he often zigzagged between favoring radical change and opposing it, or he simply became paralyzed by indecision. He later argued that he did this to avoid what he feared could become a civil war. 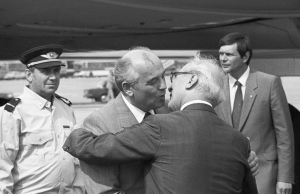 Some historians question how a man who had achieved such success within the party’s monstrous political machine could retain so much human understanding. In his youth, Gorbachev liked to read poetry and had artistic aspirations. He learned a Latin saying: “Dum spiro, spero,” meaning “So long as I breathe, I hope.”

Like many Russians, Gorbachev used profanities liberally, but he never drank much and was a tender, loving family man. On every vacation, he carried a bundle of books of literature, philosophy, and history. He had a wry sense of humor and liked to laugh. Loyal aide Anatoly Chernyaev recalled a time when Gorbachev read a highly critical novel about former leader Vladimir Lenin by Aleksandr Solzhenitsyn. Gorbachev described the book as “very powerful” and in front of his surprised aide began to impersonate the former Soviet commander with gusto and artistry. He was “one against all,” Gorbachev said admiringly of Lenin.

Lenin was initially Gorbachev’s role model. He grossly idealized Lenin’s revolutionary legacy, believing his philosophy was actually more democratic than totalitarian. Stalin became his anti-model. Gorbachev introduced glasnost and freedom of travel and conscience, and he renounced terror and violence; he wanted to dismantle the dark legacy of the great dictator.

Halfway through perestroika, Gorbachev decided to dismantle one-party rule in the Soviet Union and became, in essence, a European-style social democrat. Yet he never could figure out how to govern his complex country without tapping into its authoritarian roots—and without the Communist Party.
He liked to travel to the West and encouraged others to do so, and he liked to talk to Western leaders and reflect on his reforms in their presence, as if asking them for advice.

While in office, his favorite phrases were “let [the] process develop,” “this is unpredictable,” and “we need a consensus.” “Consensus” and “pluralism” were two of many Western words that Gorbachev introduced to the discourse of the Politburo; those words even became part of common Russian vocabulary.

His preferred method of crafting “consensus” involved long speeches and theoretical pamphlets, both of which he preferred to decrees. Many found Gorbachev long winded; a few noted that his endless monologues were a way of thinking through issues aloud, weighing a problem from all sides.

Unfortunately, many Soviet problems had only painful solutions, and Gorbachev increasingly used talking and theorizing to delay action. Not only his domestic critics but even Western partners found his governance style peculiar. In economics, he granted more autonomy and a share of profits to “the collectives” of state enterprises, yet he did not allow private property and market reforms, fearing unemployment and inequality. In politics, he created unwieldy representative institutions yet failed to build a strong executive office that could replace the power of the Communist Party. Some blamed him for opening the country to Western influences too far, too fast—allowing room for chaos in a country with entrenched authoritarian traditions.

As the Soviet economic and social crisis grew, many wanted him to use his military and security services to hold the empire together, yet he refused to do so. Gorbachev had never served in the army, an oddity for his background and generation. And he was never interested in military matters. He made his top military officers develop a doctrine of “strategic sufficiency” to avoid unlimited accumulation of weaponry. 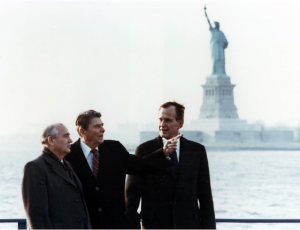 He abhorred having his finger on a nuclear trigger and became the first Soviet leader to destroy nuclear missiles. Yet for a long time, he was genuinely afraid that the United States might disarm the Soviet Union by a strike from space. Then-U.S. President Ronald Reagan, his partner in bringing the Cold War to an end, was struck by his sincerity and later became his friend. George H.W. Bush, Reagan’s successor, at first mistrusted the Soviet leader but subsequently negotiated with Gorbachev the retreat of Soviet forces from Central Europe.

As Germany moved rapidly toward reunification within NATO, Gorbachev was in a real bind. He did not want to stir up Russian chauvinism at home, but his negotiating cards were weak. At this moment, then-U.S. Secretary of State James Baker orally pledged to him that NATO would move “not one inch eastward.” Gorbachev did not insist on any confirmation, and this pledge would figure in a great controversy between Russia and NATO years later. In the fall of 1990, Gorbachev received the Nobel Peace Prize for ending the East-West conflict. 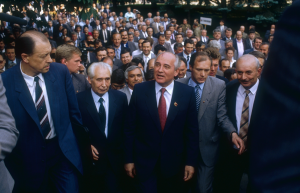 Even as Gorbachev profoundly liberalized the Soviet economic and political system, he also shared with millions of Soviets a fear of the capitalist market and what it could bring to people with lower incomes who had never known unemployment or private enterprise. In the end, his reforms helped destabilize the old system without creating a viable market economy. Soviet living standards, miserable enough, sank even lower.

He brushed this off as a temporary difficulty, even borrowing Reagan’s joke that “economists should have one arm” so they’d stop saying, “On the one hand, on the other hand.” In the end, however, his authority fell victim to a bad economy. He lost popularity to Boris Yeltsin, a Politburo maverick, who launched a campaign to assert the full sovereignty of Russia within a decentralized Soviet Union as a way out of “perestroika’s failure.”

During a fateful last vacation to Crimea in August 1991, when his own ministers declared him “sick” and put him under house arrest, Gorbachev read a historical account of the fate of Pyotr Stolypin, a prime minister who tamed the Russian Revolution of 1905 but fell victim to an assassin. He also read an American biography of Stalin. This choice of reading reflected his great interest in those who tried to rule the country with an iron hand—one who tried to tame a revolution and another who built an empire.

The three days of virtual captivity were very hard on him and Raisa, who fell sick. The conspirators, however, hesitated to shed blood against civilians in Moscow, and the coup attempt failed. Nevertheless, when Gorbachev returned to Moscow, he discovered that real power had been passed to Yeltsin, his rival. During Gorbachev’s remaining days in office, he aimed to talk Yeltsin into a compromise that would allow them to run the country jointly. In the end, however, Yeltsin unceremoniously got rid of him.

Gorbachev’s deep aversion to the use of raw power had prompted him to devolve authority to others, including the leaders of the 15 Soviet republics. Eventually he found himself a ruler without a Soviet state, yet he kept his dignity to the bitter day of Dec. 25, 1991, when he resigned and Yeltsin formally inherited the Soviet nuclear arsenal. Many of Gorbachev’s compatriots appreciated the new freedoms he had granted, yet many more blamed him for economic chaos and the collapse of the Soviet empire.

He liked to joke that “the line of those who wanted to kill Gorbachev was longer than the line to buy vodka.” Yet until his resignation in 1991, he doggedly believed that he would be able to reform the Soviet Union by guiding it through a roiling abyss of change and instability without it breaking apart.

Gorbachev was the first Russian ex-leader in a century who lived a dignified life after leaving office. He earned income from lectures and was paid to appear in advertisements, the money from which he used to support his foundation, where close aides, historians, and political scientists collected evidence about his reforms and discussed their lessons. He tried to return to Russian politics a few years after his resignation but got only a half-percent of the vote in the 1996 presidential election.

The death of Raisa in 1999 left him a lonely man. As he grew older, he began to criticize Western policies toward Russia and the enlargement of NATO, yet he stayed forever loyal to the principles of democracy, human rights, and the non-use of military force.