Historical Legacies of Communism in Russia and Eastern Europe 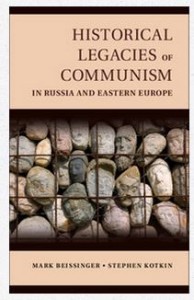 Historical Legacies of Communism in Russia and Eastern Europe

This book takes stock of arguments about the historical legacies of communism that have become common within the study of Russia and East Europe more than two decades after communism’s demise and elaborates an empirical approach to the study of historical legacies revolving around relationships and mechanisms rather than correlation and outward similarities. Eleven essays by a distinguished group of scholars assess whether post-communist developments in specific areas continue to be shaped by the experience of communism or, alternatively, by fundamental divergences produced before or after communism. Chapters deal with the variable impact of the communist experience on post-communist societies in such areas as regime trajectories and democratic political values; patterns of regional and sectoral economic development; property ownership within the energy sector; the functioning of the executive branch of government, the police, and courts; the relationship of religion to the state; government language policies; and informal relationships and practices.

Mark Beissinger, Princeton University, New Jersey
Mark R. Beissinger is Henry W. Putnam Professor of Politics at Princeton University and Director of the Princeton Institute for International and Regional Studies. He served on the faculties of Harvard University and the University of Wisconsin, Madison. Beissinger served as the founding Director of Wisconsin’s Center for Russia, East Europe, and Central Asia and later as Chair of Wisconsin’s Political Science Department, where he also held a Glenn B. and Cleone Orr Hawkins Chair. He has served as President of the American Association for the Advancement of Slavic Studies and as Vice-Chair of the National Council for Eurasian and East European Research. He is the author or editor of four books and numerous journal articles. His book Nationalist Mobilization and the Collapse of the Soviet State (Cambridge University Press, 2002) won three awards: the 2003 Woodrow Wilson Foundation Award, presented by the American Political Science Association; the 2003 Mattei Dogan Award, presented by the Society for Comparative Research; and the 2003 Award for Best Book on European Politics, presented by the Organized Section on European Politics and Society of the American Political Science Association.

Stephen Kotkin, Princeton University, New Jersey
Stephen Kotkin holds a joint appointment in the history department and the Woodrow Wilson School for Public and International Affairs at Princeton University. He has served as Vice Dean of the Woodrow Wilson School, and he established Princeton’s Global History initiative. From 1996 until 2009 Kotkin directed Princeton’s Program in Russian and Eurasian Studies. From 2003 until 2007, he was a member and then chair of the editorial board of Princeton University Press. He currently serves on the core editorial committee of the flagship journal World Politics. He has published four books and has worked as the regular book reviewer for the New York Times Sunday Business section (2006–9) and as a consultant in post-communist higher education for various foundations.