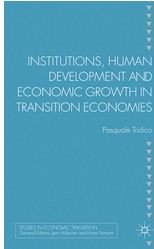 Since the fall of the Berlin Wall, the economies of Central and Eastern European countries have developed in different ways, with some considerably outperforming others. This book explores the reasons behind this: the models of capitalism that each country aimed at, the role of institutions and of institutional change in development, and the main determinants of economic and human development. Moreover, Tridico also examines the relationship between democracy and development, and questions whether democracy is a prerequisite.

The book also considers the relevance of social capital in transition economies to test the relationship between social capital and development. A comparative analysis of state policies is conducted in order to assess which policies have helped societies in transition to boost democracy, reinforce the middle class, reduce the influence of oligarchs and fill an initial systemic vacuum.

This book will be essential reading for scholars and researchers working in the field of transition and development economics, as well as those with an interest in the rise of the ‘New Europe’.