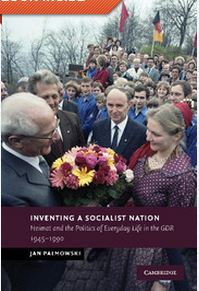 Heimat and the Politics of Everyday Life in the GDR, 1945–90

Twenty years after the collapse of the German Democratic Republic, historians still struggle to explain how an apparently stable state imploded with such vehemence. This book shows how ‘national’ identity was invented in the GDR and how citizens engaged with it. Jan Palmowski argues that it was hard for individuals to identify with the GDR amid the threat of Stasi informants and with the accelerating urban and environmental decay of the 1970s and 1980s. Since socialism contradicted its own ideals of community, identity and environmental care, citizens developed rival meanings of nationhood and identities and learned to mask their growing distance from socialism beneath regular public assertions of socialist belonging. This stabilized the party’s rule until 1989. However, when the revolution came, the alternative identifications citizens had developed for decades allowed them to abandon their ‘nation’, the GDR, with remarkable ease

Jan Palmowski, King’s College London
Jan Palmowski is Professor of Modern History and European Studies and Head of the School of Arts and Humanities at King’s College London. His previous publications include Liberalism and the City: The Case of Frankfurt Am Main, 1866–1914 (1999) and Citizenship and National Identity in Twentieth-Century Germany (as editor, with Geoff Eley, 2008).