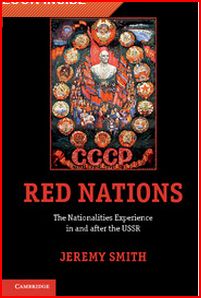 The Nationalities Experience in and after the USSR

Red Nations offers an illuminating and informative overview of how the non-Russian republics of the Soviet Union experienced communist rule. It surveys the series of historical events that contributed to the break-up of the Soviet Union and evaluates their continuing resonance across post-soviet states today. Drawing from the latest research, Professor Smith offers comprehensive coverage of the revolutionary years, the early Soviet policies of developing nations, Stalin’s purges and deportations of small nationalities, and the rise of independence movements. Through a single, unified narrative, this book illustrates how, in the post-Stalin period, many of the features of the modern nation state emerged. Both scholars and students will find this an indispensable contribution to the history of the dissolution of the USSR, the reconstruction of post-Soviet society, and its impact on non-Russian citizens from the years of the Russian Revolution through to the present day.

Jeremy Smith, Karelian Institute, University of Eastern Finland
Jeremy Smith is Professor of Russian History and Politics at the Karelian Institute, University of Eastern Finland, having lectured in Russian history at the University of Birmingham for eleven years. He has been a Visiting Researcher at Helsinki’s Aleksanteri Institute and a Visiting Professor at the University of Michigan. He has written extensively on the non-Russian nationalities of the Soviet Union, including two books, The Bolsheviks and the National Question, 1917–1923 and The Fall of Soviet Communism, 1985–1991. He has received major research grants for projects on social unrest in the Soviet Union in the 1920s, the politics and government of the USSR in the Khrushchev era, and Georgian nationalism and Soviet power in the 1950s, and is one of the organisers of the EU-Central Asia Monitoring programme. In 2001 he was elected to the International Commission on the Russian Revolution.