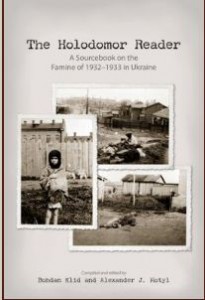 The Holodomor Reader: A Sourcebook on the Famine of 1932-1933 in Ukraine

In commemoration of the eightieth anniversary of the famine-genocide of 1932–33 in Ukraine, CIUS Press has published The Holodomor Reader, the first comprehensive English-language sourcebook on this tragedy of the Ukrainian people. The Reader is an indispensable text for those who teach, study, or simply seek to better understand the Soviet Union, Stalinism, Ukraine, and genocide. Compiled, edited, and with an introduction by Bohdan Klid and Alexander J. Motyl, The Holodomor Reader offers a comprehensive array of materials on the Holodomor, many of which have been translated especially for this publication. The materials are grouped in six sections: scholarship; legal assessments, findings, and resolutions; eyewitness accounts and memoirs; survivor testimonies, memoirs, diaries, and letters; documents; and works of literature. Each section is prefaced with introductory remarks describing the contents. The book also contains a bibliographic note and a map showing the intensity of the famine by region.
Materials for the Reader were selected with three key aims in mind. The first was to offer a broad picture of the Holodomor by presenting a large number and variety of sources and writings. The second aim was to introduce readers to the context and consequences of this genocide and to illustrate the many different ways in which it was perceived and treated by the international community, as well as by Ukrainian communities outside Soviet Ukraine. The third aim was to highlight the national characteristics and consequences of the famine and its relation to nationalism and the nationality question in the Soviet Union. The book’s focus on this third aspect of the Holodomor, largely ignored in Western scholarship, reveals more clearly its genocidal nature.
The new book was published with the support of the estate of Edward Brodacky of London, England, and the newly created Holodomor Research and Education Consortium (HREC).
Bohdan Klid is assistant director of the Canadian Institute of Ukrainian Studies, University of Alberta. He has published articles on Ukrainian history, politics, and music.
Alexander J. Motyl, professor of political science at Rutgers University, is a specialist on Ukraine, Russia, and the USSR. He has written six scholarly books and six novels.