Why Communism Did Not Collapse

Home » Baltico » Why Communism Did Not Collapse 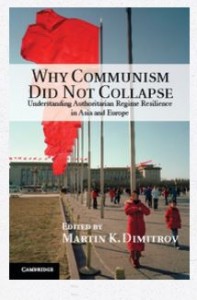 This volume brings together a distinguished group of scholars working to address the puzzling durability of communist autocracies in Eastern Europe and Asia, which are the longest-lasting type of nondemocratic regime to emerge after World War I. The volume conceptualizes the communist universe as consisting of the ten regimes in Eastern Europe and Mongolia that eventually collapsed in 1989–91, and the five regimes that survived the fall of the Berlin Wall: China, Vietnam, Laos, North Korea, and Cuba. Taken together, the essays offer a theoretical argument that emphasizes the importance of institutional adaptations as a foundation of communist resilience. In particular, the contributors focus on four adaptations: of the economy, of ideology, of the mechanisms for inclusion of potential rivals, and of the institutions of vertical and horizontal accountability. The volume argues that when regimes are no longer able to implement adaptive change, contingent leadership choices and contagion dynamics make collapse more likely. By conducting systematic paired comparisons of the European and Asian cases and by developing arguments that encompass both collapse and resilience, the volume offers a new methodological approach for studying communist autocracies.