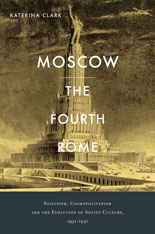 Moscow, the Fourth Rome. Stalinism, Cosmopolitanism, and the Evolution of Soviet Culture, 1931-1941

In the early sixteenth century, the monk Filofei proclaimed Moscow the “Third Rome.” By the 1930s, intellectuals and artists all over the world thought of Moscow as a mecca of secular enlightenment. In Moscow, the Fourth Rome, Katerina Clark shows how Soviet officials and intellectuals, in seeking to capture the imagination of leftist and anti-fascist intellectuals throughout the world, sought to establish their capital as the cosmopolitan center of a post-Christian confederation and to rebuild it to become a beacon for the rest of the world.

Clark provides an interpretative cultural history of the city during the crucial 1930s, the decade of the Great Purge. She draws on the work of intellectuals such as Sergei Eisenstein, Sergei Tretiakov, Mikhail Koltsov, and Ilya Ehrenburg to shed light on the singular Zeitgeist of that most Stalinist of periods. In her account, the decade emerges as an important moment in the prehistory of key concepts in literary and cultural studies today—transnationalism, cosmopolitanism, and world literature. By bringing to light neglected antecedents, she provides a new polemical and political context for understanding canonical works of writers such as Brecht, Benjamin, Lukacs, and Bakhtin.

Moscow, the Fourth Rome breaches the intellectual iron curtain that has circumscribed cultural histories of Stalinist Russia, by broadening the framework to include considerable interaction with Western intellectuals and trends. Its integration of the understudied international dimension into the interpretation of Soviet culture remedies misunderstandings of the world-historical significance of Moscow under Stalin.