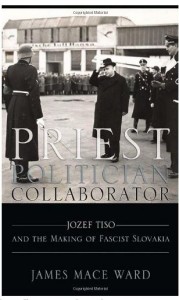 In Priest, Politician, Collaborator, James Mace Ward offers the first comprehensive and scholarly English-language biography of the Catholic priest and Slovak nationalist Jozef Tiso (1887–1947). The first president of an independent Slovakia, established as a satellite of Nazi Germany, Tiso was ultimately hanged for treason and (in effect) crimes against humanity by a postwar reunified Czechoslovakia. Drawing on extensive archival research, Ward portrays Tiso as a devoutly religious man who came to privilege the maintenance of a Slovak state over all other concerns, helping thus to condemn Slovak Jewry to destruction. Ward, however, refuses to reduce Tiso to a mere opportunist, portraying him also as a man of principle and a victim of international circumstances. This potent mix, combined with an almost epic ability to deny the consequences of his own actions, ultimately led to Tiso’s undoing.

Tiso began his career as a fervent priest seeking to defend the church and pursue social justice within the Kingdom of Hungary. With the breakup of Austria-Hungary in 1918 and the creation of a Czechoslovak Republic, these missions then fused with a parochial Slovak nationalist agenda, a complex process that is the core narrative of the book. Ward presents the strongest case yet for Tiso’s heavy responsibility in the Holocaust, crimes that he investigates as an outcome of the interplay between Tiso’s lifelong pattern of collaboration and the murderous international politics of Hitler’s Europe. To this day memories of Tiso divide opinion within Slovakia, burdening the country’s efforts to come to terms with its own history. As portrayed in this masterful biography, Tiso’s life not only illuminates the history of a small state but also supplies a missing piece of the larger puzzle that was interwar and wartime Europe.