The Balkan Wars in the Eyes of the Warring Parties 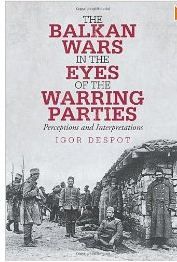 The Balkan Wars in the Eyes of the Warring Parties: Perceptions and Interpretations

In the fall of 1912, the Ottoman Empire was in turmoil. In addition to the Albanian and the Yemen rebellions, the Empire was at war with Italy over the Libyan territory. Worse yet, cholera was spreading throughout the country, leaving a decimated population in its wake. In its weakness, the Ottoman Empire was ripe to be attacked, and the Balkan countries did so. On October 8, 1912, Montenegro declared war on the Ottoman Empire, beginning the first of the Balkan Wars. Embracing maturity and setting their differences aside, four nations joined together to form the Balkan League—Serbia, Greece, Montenegro, and Bulgaria.

Despite the tremendous land victory celebrated by the Balkan League, disputes over dividing the won territory soon arose. Dissatisfied with its share of the Macedonia, Bulgaria attacked its former allies Serbia and Greece. On August 10, 1913, the Treaty of Bucharest ended the second conflict, but it did not bring the peace. In the First World War, which was initiated by Sarajevo assassination, Balkan again became theater of the war.

The Balkan wars have been a popular topic for scholarly research since their resolution. Despite the attention this topic has received, however, the research is far from complete. In this study contributing to the documentation and understanding of this conflict, author Igor Despot has not only reviews the events of the wars, but also considers these events in light of pertinent cultural aspects, identifying the commonalities and differences that may have determined alliances or sparked conflict throughout Balkan history.

Igor Despot was born in Zagreb. He graduated from the faculty of humanities and social science of the University of Zagreb in 1998, obtaining the degree of history and philosophy professor. He obtained his master’s degree on 2008 from the same faculty. This is his PhD dissertation, which he defended in 2012.